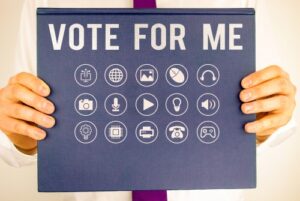 With one month until Nebraska’s Primary Elections, let’s take a look at the candidates and Carnac the results. In consultation with many undependable sources, and with certain callous intentions, these hermetically sealed prognostications will offend many and identify those who will advance to the November 3 General Election. Note: Libertarians and Green Party candidates are not considered. They never win.

Elections are a good deal like marriages. There’s no accounting for anyone’s taste. Every time we see a bridegroom, we wonder why she ever picked him, and it’s the same with public officials. – Will Rogers

STATE LEGISLATURE
Twenty-five of the 49 legislative seats are in play this year. While the Unicameral is technically nonpartisan, political affiliations are noted because it matters. In 2020, the Legislature counts 28 Republicans, 18 Democrats, and 1 Independent. The 16 pink races below have significant political implications in November.

Next week, we will send a full description of the candidates, including mugshots.