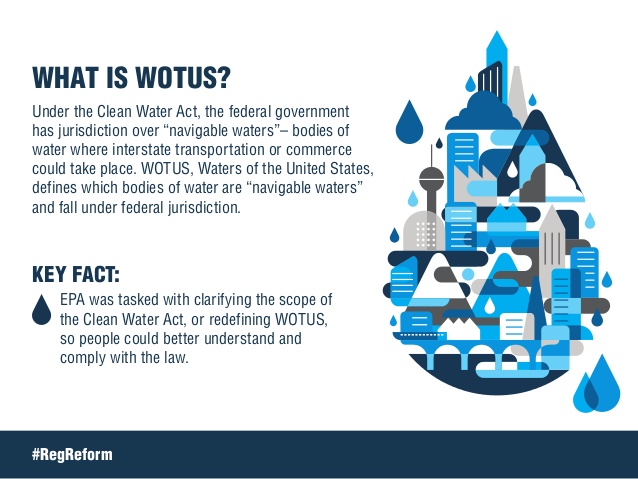 “Today’s announcement by EPA and Army Corps of Engineers to delay implementation of the 2015 Waters of the U.S. (WOTUS) rule is another positive step toward the elimination of this harmful, vague, and burdensome regulation. Without today’s announced 2-year delay, Nebraska’s farmers, ranchers, small business owners, and virtually anyone who turns earth with a shovel, would have been subject to federal regulations which looked to treat dry land as flowing water.”
“Now that the delay of the rule has been finalized, we call upon the EPA to work with our nation’s landowners to develop a rule which follows common sense and also protects our nation’s water supply. These ideas are not mutually exclusive. Our coalition stands ready to work with the EPA as well as the Corps, to develop a new rule which accomplishes both of these goals.”
Scott Merritt, President
Nebraska Agri-Business Association

WASHINGTON (January 31, 2018) – Today, the U.S. Environmental Protection Agency (EPA) and U.S. Department of the Army (Army) have finalized a rule adding an applicability date to the 2015 Clean Water Rule (the 2015 Rule). This rule provides clarity and certainty about which definition of “waters of the United States” is applicable nationwide in response to judicial actions that could result in confusion. The new applicability date will be two years after today’s action is published in the Federal Register, during which time both agencies will continue the process of reconsidering the 2015 Rule.

“Today, EPA is taking action to reduce confusion and provide certainty to America’s farmers and ranchers,” said EPA Administrator Scott Pruitt. “The 2015 WOTUS rule developed by the Obama administration will not be applicable for the next two years, while we work through the process of providing long-term regulatory certainty across all 50 states about what waters are subject to federal regulation.”

“We are committed to transparency as we execute the Clean Water Act Section 404 regulatory program. The Army and EPA proposed this rule to provide the regulated public clarity and predictability during the rule making process,” said Acting Assistant Secretary of the Army (Civil Works) Ryan Fisher.

The 2015 Rule, which redefined the scope of where the Clean Water Act applies, had an effective date of August 28, 2015. The U.S. Court of Appeals for the Sixth Circuit’s nationwide stay halted implementation of the 2015 Rule. But last week the Supreme Court determined that the U.S. Courts of Appeals do not have original jurisdiction to review these challenges and, therefore, the Sixth Circuit lacked authority to issue a stay. Given uncertainty about litigation in multiple district courts over the 2015 Rule, this action provides much needed certainty and clarity to the regulated community during the ongoing regulatory process.

Today’s final rule is separate from the two-step process the agencies are currently taking to reconsider the 2015 Rule. The public comment period for the Step 1 rule proposing to rescind the 2015 Rule closed in September 2017, and those comments are currently under review by the agencies. EPA and the Army are also in the process of reviewing input from state, local, and tribal governments and other stakeholders as they work to develop a proposed Step 2 rule that would revise the definition of “waters of the United States.”

On February 28, 2017, President Trump issued Executive Order (EO) 13778, “Restoring the Rule of Law, Federalism, and Economic Growth by Reviewing the ‘Waters of the United States’ Rule.” As EO 13778 stated, it is in the national interest to ensure that the nation’s navigable waters are kept free from pollution, while simultaneously promoting economic growth, minimizing regulatory uncertainty, and respecting the roles of both Congress and States under the Constitution.