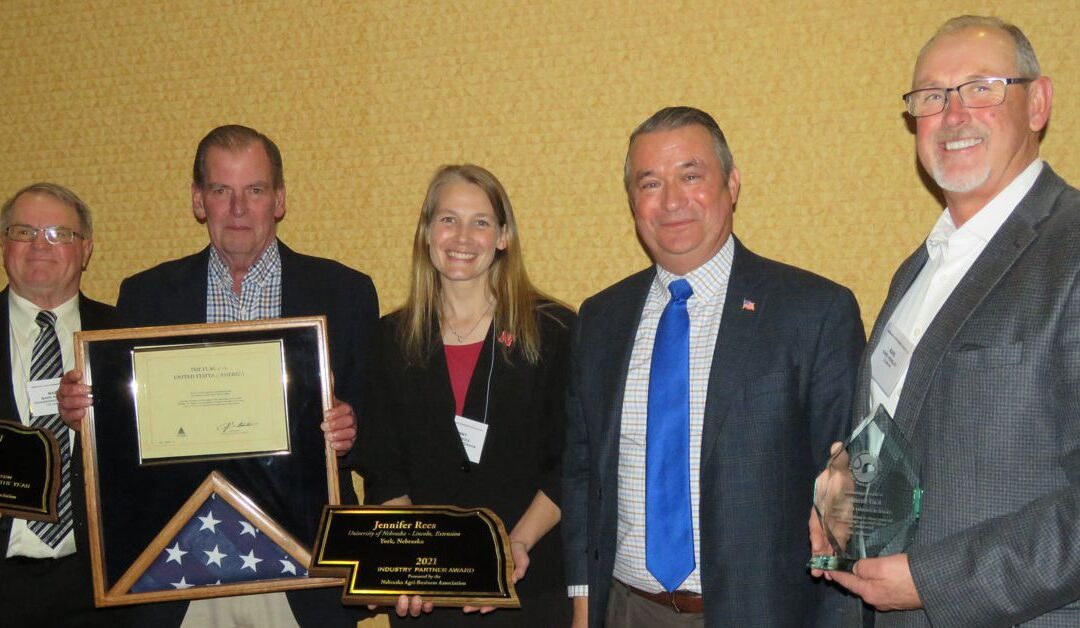 (La Vista, NE) The 64th Nebraska Agri-Business Exposition was held January 25-26, 2022 at the Embassy Suites La Vista Conference Center in La Vista, Nebraska. This day and a half event consisted of educational training on Agricultural Budgeting, Carbon Markets and Nitrogen Stabilizers and a show of vendor exhibits. The association also welcomed Congressman Don Bacon from Nebraska’s Second District to the Directors’ and Industry Awards Reception.

The Nebraska Agri-Business Association (NeABA) honored industry leaders at its annual convention in La Vista on Monday, January 24. Jenny Rees, a Nebraska Extension Educator in York and Seward Counties was awarded the 2021 Association Industry Partner Award. This award highlights individuals outside the association’s membership, who have contributed to agriculture in a significant way through their profession. Jenny has a passion to continue learning, teaching, and building relationships with farmers and ag industry professionals. “She has been an important advisor to the York County Corn Growers Association and active in the On-farm Research Network. It’s amazing how many quality meetings and activities she packed into her schedule during her 18-year career,” said Dan Stork, Chairman of NeABA.

Karl Hensley was recognized with the “Award of Industry Distinction.” This special honor is not given annually and is reserved for individuals who have been dedicated to the mission of the Association during his lifetime. Karl lives in Elgin and served the agricultural industry for over 40 years, including 34 years with Central Valley Ag Coop, headquartered in York. He is currently a consultant for the Farrell Growth Group. Karl was honored for his many contributions to the ag retail profession, education, agronomy and community. He was association chairman in 2013 and received awards from FFA, Northeast Community College and was Nebraska Agri-Business Association’s Person of the year in 2008.

These awards were presented by Dan Stork, Chairman of the Association and a York resident. Dan just completed a 42-year career with Syngenta.

Presented by Vice Chairman, Brock Emery, the “Robert L. Anderson Industry Person of the Year” award recipient was Mark Kimball. Mark owns and operates Progressive Fertilizer in Callaway, serving as manager for 40 years. He was certified under Nebraska’s original NCCPA Program, known as the CCA Program today. In addition to serving as Chairman of the association in 2014, Mark was elected and served two terms on the board of directors. Mark volunteers in his community as well, serving on the Callaway District Hospital Board and the Village of Callaway Board. This award honors a member of the Nebraska Agri-Business Association for their exemplary service to the industry.

Charles Starostka was also honored for the time he has devoted over the years to visiting DC and working on issues that affect fertilizer and chemical dealers and their customers. On those DC Trips, Charles is dedicated to mentoring and teaching other members the importance of engaging with elected officials and agencies. Charles was presented a flag flown over the nation’s capital at the request of Congressman Adrian Smith, in recognition of his many years of service to Nebraska and agribusiness communities.