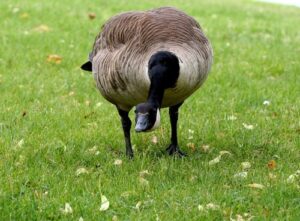 General File Floor debate can be like watching a mother goose protect her goslings. Picture Appropriations Committee Chair John Stinner (Gering) fending off senators with his DAD VOICE before picking off vulnerable cash funds. No, the debate wasn’t always collegial. Some folks raised their voices, and at times, emotions ran frighteningly high. All for naught.

The Committee budget remains whole. However, for actual entertainment value, you can’t beat the symbolic removal of a rogue senator’s knees in attempting to reappropriate millions of dollars. Not only because it’s humiliating, but it’s also in public…on television…on social media, and in front of Mom and Dad.

The Rainy Day Fund (cash reserve) increases to a very respectable $733 million. After all the cussing and discussing, $211 million remains up for grabs to fund marvelous new legislative initiatives.

Governor Ricketts’ $230 million, five-year proposal dealing with overcrowding at the aging State Pen advanced to Select File. The plan begins with a $14.9 million design, study, and securing land options between Omaha and Lincoln. That would be where an available workforce lives!

A real highlight of the budget process is when senators approve their $12,000 a year salary. Two unoriginal thoughts:

In response: Number one is stupid. Number two, thank goodness most of them don’t care.

Approved by the Governor