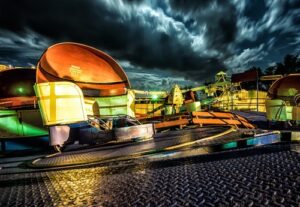 Big News!! The “Super Seven” (not to be confused with the previous Gang of Ten) may have arrived at a compromise to reduce property taxes. The Legislature’s Bill Drafters are writing an amendment to Priority Bill, LB 930 so we can actually read the bill…before they pass it. Language may be available Monday. See the rumored details below under General File.

Friday morning, senators were pushing their green buttons like carnies punching Tilt-A-Whirl tickets at the State Fair. They sent thirty-five bills to the Governor’s desk for signature, including the all important adjusted budget.

Senator Ernie Chambers spent much of last week on the microphone. The rhetoric has not changed in more than forty years. Like a carnival barker, he attacked the Governor, condemned Republicans, and disparaged the vast majority of people in the state. Chambers did pass a bill. Likely his last. The 83-year-old term-limited (again) senator passed anti-bias and implicit bias police training legislation. Fitting.

A public hearing was held Friday afternoon for the recently introduced Municipal Police Oversight Act (LB 1222), a nod to BLM. The bill requires that any city employing full-time police officers shall create a seven-member citizen oversight board empowered to investigate all cases of alleged police misconduct in addition to other powers and authority. Cities and police departments are strongly opposed. They are a strong lobby.

Seven more legislative days (Mo-Th this week / Tu-Th next week) until this midway closes for the season. Priority bills on Final Reading and Select File will litter the agenda. Most of the public will not notice if bills pass or fail, but pay attention to the business incentive package in LB 720 and the new LB 930 property tax relief bill. It’s doubtful that one bill will advance without the other.

Thursday, August 6, is the final day for senators to advance bills to the Governor, without fear of the dreaded Pocket Veto. By rule, the Governor is allowed up to five days (excluding Sunday) to approve or veto a bill. With a four-day recess this Friday through Monday, August 12 and 13 are the last days in which the Legislature can attempt veto overrides. After that…check his pockets.

Advanced to the Governor