He Said, She Said 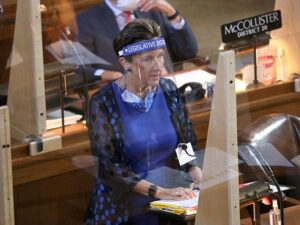 Before Monday, all state senators had not been in the same room since March 25. As the COVID interrupted legislative session came to order, a certain awkwardness was to be expected until the ship righted itself.

From the vantage point of a 55″ flat screen, the initial mojo reading was low in the George W. Norris Chamber. Senators were seated and socially distanced; surrounded by plexiglass; masks in the full and upright position; no staff in the chamber, and mass quantities of hand sanitizer cluttered their desktops.

An early dust-up Monday morning, and a doozie on Tuesday, were mere precursors to the eruption of personal attacks Friday morning. Visibly frustrated, Speaker Scheer adjourned the session early.

For the most part, bills were dispatched efficiently for the rest of the week. A dismemberment abortion bill (LB814) sent senators scrambling for the lifeboats before passing, and a much-maligned student discipline bill (LB 147) is now sleeping with the fishes.

The business incentive bill, LB 720, received time on the floor, as did the latest version of property tax relief, LB 1106. Both failed to advance.

The Revenue Committee met after the Friday morning session to discuss a remedy (that’s code for an amendment) that can gain 33 votes to pass both LB 720 and LB 1106. Rumor has it that the committee unceremoniously adjourned as some members took a walk.

Thursday, the Nebraska Economic Forecasting Advisory Board met. Members split on their official FY2020/21 forecast that is $145 million higher than projected by their national forecasting experts Moody’s and IHS. The estimate decreases state receipts by only $50 million, leaving a budget surplus of $88 million.

BTW, the climate change bill supported last week by Lee Enterprises’ newspapers and many children who lobbied their state senators, was frozen out.