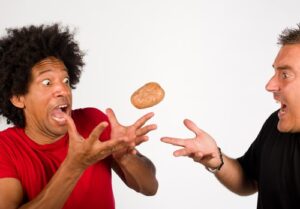 Nebraska prisons are the second most crowded in the country. Right behind Alabama. Ugh! Last year, we housed 5,369 inmates in facilities designed for 3,535.

In 2015, the Legislature enacted a host of sentencing reforms to reduce the prison population. They also passed a law that says, “a correctional system overcrowding emergency exists when the director (Director of Corrections) certifies that the department’s inmate population exceeds 140% of design capacity.”

In the past five years, the director has made no such certification, even though he recently said the inmate population has exceeded 140% since 2009, and state prisons have been under built for at least 40 years.

Solutions to prison overcrowding have resembled the Hot Potato song; Corrections Director pass it on, Legislature pass it on, Governor pass it on, Parole Board…ACLU…prisoners…taxpayers. Today, the inmate population exceeds 150% of the facilities’ design capacity.

Hot potato. The law also says, “the director SHALL declare a correctional system overcrowding emergency on July 1, 2020, if the inmate population exceeds 140% of design capacity. On Wednesday, Director Frakes must certify the overpopulation.

Hot potato. What happens under the emergency? The law says, “During a correctional system overcrowding emergency, the board (Parole Board) shall immediately consider or reconsider committed offenders eligible for parole who have not been released on parole.”

Hot potato. The Governor, Frakes, and the parole board don’t seem concerned and do not believe this will result in the wholesale parole of inmates. To bring the overcrowded population down to 140% would require the release of 500 inmates. Release 1,000 inmates, and that number goes down to 130%. That’s not going to happen.

Hot potato. The statute also says, the board shall continue granting parole to offenders until the director certifies that the population is at operational capacity, which is 125% of design capacity.

Hot potato. Over the past five years, the state spent $170 million on new prison facilities. Director Frakes is now investigating a $200-$300 million-ish, 1,600 bed prison between Omaha and Lincoln. Taxpayers have remained relatively quiet about the cost of incarcerating criminals. Maybe they don’t know the state spends more than $38,000 per inmate each year now.

Hot potato. The much heralded sentencing reforms passed by the Legislative in 2015 have been less than effective at reducing prison populations.

Hot potato. The ACLU and others continue to engage on behalf of inmates’ rights that include overcrowding, lack of adequate medical, mental health, and dental care; overuse of solitary confinement; etc. Don’t discount their efforts or their intensity in a court of law.

BTW, don’t look for solutions on July 21, or anytime soon.