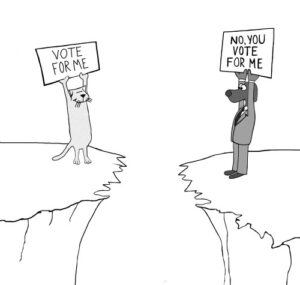 Pause your TV and turn your attention (or lack thereof) away from the claptrap of federal campaigns. Especially those polyethylene media big mouths who believe we can’t possibly understand what candidates tell us without their interpretation. Instead, let’s go local.

Nebraska filing deadlines for incumbent officeholders and non-incumbents have passed. Sixty candidates filed for 25 seats in the $1,000 per month Legislature. Which, by the way, has far more reason to tinker with your everyday taxes, rights, and freedoms than those bags o’ wind in the House and Senate…certainly our outstanding congressional delegation is excluded.

These are the marque (media interpretation – expensive) races:

Senator Lou Ann Linehan announced that she does not have the required 33 votes to override a filibuster against the Revenue Committee’s property tax relief bill LB 974. K-12 administrators still hate it, so many urban senators follow that lead. Linehan continues to negotiate.

The ImagiNE Act (LB 720) provides incentives for businesses. The bill must wait patiently in line for LB 974 to swim or go down for the third time. Based on the outcome of LB 974, the incentives package may be short of 33 votes to override a filibuster.

LB1084 (Kolterman / MONITOR) THIS BILL WILL ADVANCE FROM COMMITTEE