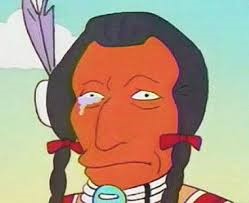 This characterization of Iron Eyes Cody (Keep America Beautiful) sums-up the emotions of those who paid attention to floor debate last week. There was sincere partisanship, a genuine adversity for compromise and rules abuse by senators of every persuasion. Sound historically familiar?

BTW, did you know that good ole Iron Eyes was actually Italian-American? He was born Espera Oscar de Corti in Louisiana to a Sicilian mother and southern Italian father. He changed his name to Tony Cody in Hollywood. Falso Indiano.

The mainline budget bill (LB944) failed to advance to Select File – for a second time. It’s still hung-up on Title X funding for organizations that perform, counsel or refer for abortions. According to the “Rules of the Nebraska Unicameral Legislature” appropriations bills shall be passed no later than the 50th legislative day in a 60 day session. If this deadline is not met, the Legislature shall consider the appropriations bills as introduced by the Governor. AND, TUESDAY IS DAY 50!!

In addition to bringing back the budget bill LB944 until it passes, Speaker Scheer intends to debate the following bills this week:

Priority Bills on our Tracking Sheet

LB44 (Watermeier) FINAL READING
Would increase state sales tax revenue through collection of taxes on Internet purchases. The Governor will not sign this bill if it passes Final Reading.

LB829 (Erdman) In Committee DEAD
Would enable Nebraska property owners to get a credit or refund on their state income tax return equal to 50% of that portion of their property tax bill, which goes to fund K-12 education.

LB947 (Smith for the Governor) GENERAL FILE AND ON THE AGENDA THIS WEEK.
Senator Groene was the fifth vote in the Revenue Committee to advance the bill. Not sure what he got in return, but his LB640 is back in play.  As amended, property tax payers would receive a refundable credit against income taxes paid, beginning 2018. A refundable credit on income taxes paid for homesteads begins at 1% and caps at 20% over ten years. Agricultural and horticultural credit on income taxes paid begins at 2% and caps at 20% over 10 years.

LB1103 (Friesen) In Committee
Creates foundation aid that is the greater of 25% of the basic funding calculated for a school district or the total amount certified for a local system, proportionally based on the formula students attributed to each district.  Senator Friesen is having difficulty getting five votes in committee to advance the bill.