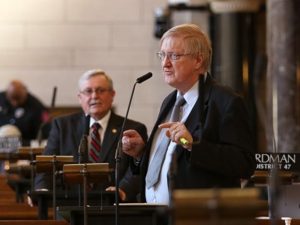 Good news for all Nebraskans! The 60th and final legislative day is April 18.  The Speaker might adjourn the kids on April 11 (Day 59) if they play nice and do their chores.

This week, senators will begin debate on mid-term adjustments to the State’s $8.9 billion biennial budget. By rule, changes in the budget must be approved by Day 50. State revenues are still in the dumper, so floor debate will focus on budget cuts, rather than spending.

Private negotiations concerning tax relief (property and corporate income) are getting serious. A prediction: if a deal comes together, no one will particularly like it, tax cuts will phase in over 70 dog years, and all parties will claim victory. Which begs a question. Where does the money for tax cuts come from if government is already short of cash? It’s good old fashioned FM, my friends.

LB1090 advanced from General File to Select File on Friday. This is a significant bill for taxpayers, yet coffee shop geezers are way out of the loop on this one. Nebraska’s tax law partially mirrors federal tax code. So…. the Trump Tax Cuts and Jobs Act, that everyone so much appreciates, does not kick in for Nebraska taxpayers unless the Legislature and Governor pass legislation. Put simply, NO LB1090 = NO $226 MILLION IN TAXPAYERS’ POCKETS.

Senator Schumacher (The Professor) had an absolute ball last week on General File. He made senators think and thoughtfully debate his idea for the creation of a Sovereign City, no bigger than 36 square miles in a part of the state where there are currently less than 10 people per square mile. Sure, a couple fuddy-duddies poked fun and laughed at his concept, but they had to genuinely consider an idea that just might stimulate economic and population growth in Nebraska’s sparsest of areas. Schumacher’s bill did not pass, but the vote total was tied – 19-19. This is the Professor’s final session due to term limits. Gonna miss that nutty guy.

LB829 (Erdman) In Committee – Would enable Nebraska property owners to get a credit or refund on their state income tax return equal to 50% of that portion of their property tax bill, which goes to fund K-12 education.

LB1103 (Friesen) In Committee – Creates foundation aid that is the greater of 25% of the basic funding calculated for a school district or the total amount certified for a local system, proportionally based on the formula students attributed to each district.