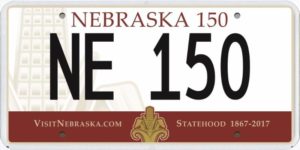 A&E Network was in Lincoln to develop a pilot like their hit reality series STORAGE WAR$.That’s the show in which unpaid storage units are sold at auction. Bidders get mad at one another and say the darndest things. A&E cleverly named this show LICENSE PLATE WARS.

The pilot began earlier in the session when a senator introduced LB 46. It adds “Choose Life” to the list of specialty license plates.The bill moved quickly through the process of a hearing and advanced to General File. Monday, LB 46 came up for debate and cameras rolled all week.

After six hours of LICENSE PLATE WARS it’s clear that A&E has a flop on its hands. Filibusters somehow lack the comedic tone of tough guy Dave Hester pulling a fast one on goofy Darrell Sheets. LB 46 advanced by cloture to Select File, but a filibuster will continue this week on the accompanying appropriation (A bill). Talk about a specialty plate that’s personal!

Senator Watermeier prioritized LB 44 that would require remote (Internet) sellers to collect and remit Nebraska sales tax.  The Revenue Committee held a hearing on the bill 1/27/17, but has not yet advanced it to General File. Committee hearings for LB 67 and LB 572 are Thursday. These are the last hearings on our Tracking Sheet.