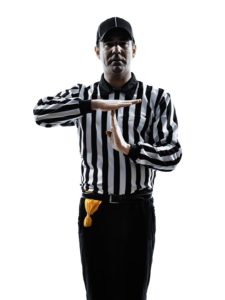 After 31 acrimonious eye poking days of debate on the floor of the Legislature, Coach (Speaker) Scheer, called a timeout. Infractions have escalated since Day 1 when Team Majority scored on the old Student Body Right and captured nearly every leadership position in the house.

Team Majority even attempted the fumblerooski to change the delay of game rules. Team Minority has vigorously opposed the tactic by (wait for it) delaying the game.

With no TV timeouts, the teams are tired and the game has largely been played between the 40’s. Coach Scheer’s strategy benched Rules debate until March 20 (Day 50). For the next 18 days, the teams must focus on playing the game according to the last year’s rules.  Crafty move by the old warhorse.

The time-keeper scheduled a four-day recess this weekend of President’s Day. A welcome break for players, staff and fans. Just enough time for teams to get back to their Districts; hop in a whirlpool; sign a few autographs and wash their uniforms before the game resumes on Tuesday.

Two hearings in the Judiciary Committee this week:

LB165 (Brewer) The bill requires employer identification numbers and use of the federal immigration verification system.